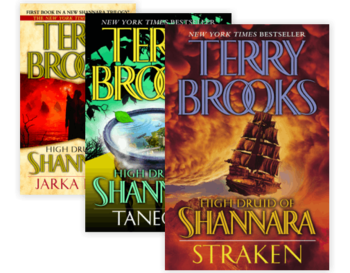 High Druid of Shannara is an installment in Terry Brooks' long-running Shannara series. It is a trilogy, composed of Jarka Ruus, Tanequil, and Straken. Set a two decades after The Voyage of the Jerle Shannara, it chronicles the efforts of Grianne Ohmsford, High Druid and former Ilse Witch, to build a Druid Order worthy of her promise to Walker Boh. When the series opens, Grianne is off to a fairly successful start, having recruited a few dozen Druids, and opened diplomatic relations with the governments of the Four Lands.

All is not well, however, and dark forces are conspiring against Grianne. Within Paranor, rebellious Druid Shadea a'Ru is preparing her allies for a coup. Reaching out to the Prime Minister of The Federation's Coalition Council, Shadea aims to displace Grianne, and make herself the new High Druid. At the same time, the Straken (Demon) Lord Tael Riverine, is laying plans to escape from the Forbidding, and decides that Shadea is exactly the sort of tool he needs.

When Shadea's attack finally does come, it traps Grianne in the Forbidding, where forces loyal to Tael aim to hunt her down and make her his prisoner. Worse still, Shadea's actions turn The Moric, one of Tael's most trusted servants, loose in the Four Lands, from which it can conspire to bring down the Forbidding, leading to a repeat of the horrible war from The Elfstones of Shannara. It falls on Grianne's nephew, Pen, to free her from the Forbidding, and put an end to Shadea and Tael's plots.

Tropes associated with this trilogy include: