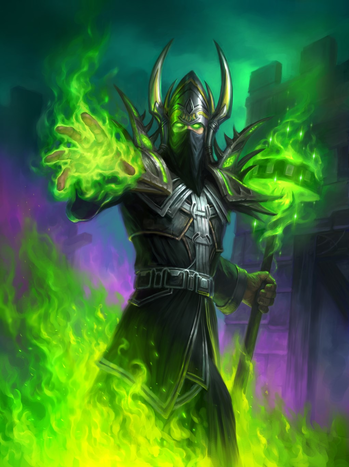 Abra Ka-dead!
"Within the navel of this hideous wood,
Immured in cypress shades, a sorcerer dwells,
Of Bacchus and of Circe born, great Comus,
Deep skilled in all his mother's witcheries,
And here to every thirsty wanderer
By sly enticement gives his baneful cup,
With many murmurs mixed, whose pleasing poison
The visage quite transforms of him that drinks,
And the inglorious likeness of a beast
Fixes instead, unmoulding reason's mintage
Charactered in the face."
— John Milton, Comus
Advertisement:

They're the mage who has delved too deeply into Things Man Was Not Meant to Know and mastered The Dark Arts. They've achieved great power, but at the expense of their soul. They deal in Black Magic and might well have made a Deal with the Devil. Evil Sorcerers are very dangerous foes, as they are creative as well as clever. From them, one can expect anything; hordes of demonic (or undead) Mooks as the bluntest tool, More than Mind Control as the subtlest one, and anything between those two and beyond. They will probably be a Sorcerous Overlord, dwelling in an Evil Tower of Ominousness and ruling the land with an iron — but also magical — fist, though they may also show up as an Evil Chancellor, using their powers to subvert the throne more subtly.

The Evil Sorcerer nearly always gets top billing as a villain, as one of their most common traits is pride. Where they're a second-stringer, they're likely to only be one-upped by a demonic bargain gone wrong — probably because they cheated. This makes them prone to learning the painful lesson that Evil Is Not a Toy. They might also be upstaged by a God of Evil — but then, the most powerful Evil Sorcerers often have delusions of godhood themselves. In a villainous hierarchy, they'll most likely be the Big Bad, The Dragon, or the Evil Genius (though they could also be The Man Behind the Man or, if they're little loyalty to any particular faction, the Wild Card). Killing the Evil Sorcerer is one way to stop their Keystone Army.

The Evil Sorcerer can be at several levels of the Super Weight scale (depending on how strong magic is in a given setting) but he'll almost always be far more powerful than the heroes (unless they manage to get physical with them), and will probably be at least superficially stronger than their good counterparts (owing to possessing powers that the good can't or won't use). If they're an Evil Archmage, everybody should watch out.

It's likely that every sorcerer will be this if Magic is Evil. Compare the Wicked Witch and (for the more modern descendant) Mad Scientist, although some overlap isn't unheard of. Female versions are likely to also be a Vain Sorceress or Lady of Black Magic. An undead Evil Sorcerer will probably be called a Lich.