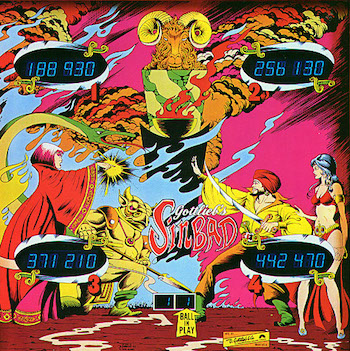 Sinbad is a 1978 solid-state pinball table by Gottlieb, designed by Ed Krynski and illustrated by Gordon Morison.

The game is a licensed tie-in to the Ray Harryhausen movie, Sinbad and the Eye of the Tiger . As Sinbad, the player must help Princess Farah defeat the evil Sorceress Zenobia and stop her wicked son from being crowned King. Although Zenobia is armed with her magicks and her golden clockwork minotaur, Sinbad can courageously build up his scimitar's score, then hit the various color-coded drop targets in the exact order to raise the bonus multiplier and ultimately triumph.

Sinbad rode the popularity of the movie to become Gottlieb's best-selling game of The '70s; over 12,000 tables were sold, with another 1,500 in the electro-mechnical versions of "Sinbad" and "Eye of the Tiger." The success proves warranted, as Sinbad is widely considered a great game — the modest pace and wealth of drop targets make this a table for pro shooters, requiring careful planning, steely patience, and precise aim with the double flippers to do well. Wrapped up with heroically colorful artwork and melodic chines, Sinbad is a game that holds its age well.