Literature / Sword with No Name 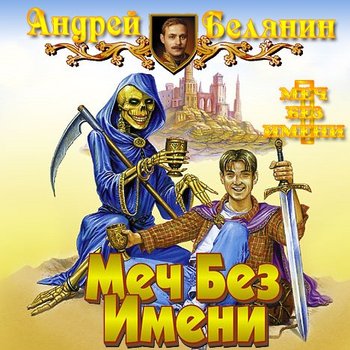 Sword with No Name (Меч без имени, Mech bez imeni) is a trilogy of Russian fantasy novels, written by Andrei Belyanin. Typical of Belyanin's works, it features a modern-day man finding himself in a Medieval European Fantasy. The novels are written in First-Person Perspective.
Advertisement:

The protagonist is a modern (well, in The '90s) Russian man named Andrei, who goes with his wife and friends to a festival with a Medieval theme. While there, he decides to play around, grabs a plastic sword and starts a mock fight with an executioner. Before he knows it, he's attacked by guards using honest-to-God Medieval weapons. Suddenly, a magnificent sword literally falls into his hand and appears to have a mind of its own. He ends up fleeing from the guards into a building and comes out in, what he eventually discovers, is a magical realm, ruled by the tyrannical Evil Sorcerer Riesenkampff, who killed the king of Lokheim, the Fading City, and forcibly married the king's daughter, now Queen Tanitrielle, in order to legitimize his rule. According The Prophecy, only the Chosen One, bearing the fabled Sword with No Name and the title of Landgrave, can slay Riesenkampff and end his evil reign. Unfortunately, there have already been twelve Landgraves, and all of them were killed. Andrei becomes the Thirteenth Landgrave, whether he wants it or not, and immediately finds himself a target.

Andrei manages to flee the floating city and quickly finds himself traveling companions: Lia, a Runaway Bride, who serves as the Landgrave's page and dresses as a boy; Sir Jean-Baptiste-Claude-Chardin le Boule de Zir (whom Andrei nicknames "Bulldozer"), a Lovable Coward, who begs Andrei to take him on as his squire rather than return home in disgrace, after being soundly beaten by Andrei; and Veronica, a 15-year-old witch, whom Andrei saves from being burned by townsfolk. Lia accidentally dubs him Lord Skiminok, after mishearing a word he utters in reference to the symbol on the cloak given to him by Queen Tanitrielle, and he decides he likes it. Throughout his journeys, he meets both friends and enemies, as the world has split itself between those, who seek to help the Thirteenth Landgrave overthrow the Evil Sorcerer, and those, who either like the status quo, fear Riesenkampff's reprisal, or expect a handsome reward for capturing or killing the Landgrave.

The original novel was later followed by The Furious Landgrave and The Age of Saint Skiminok.