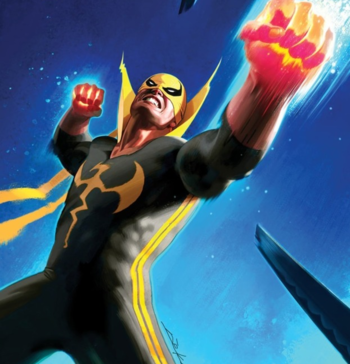 Daniel Rand is the rich multi-millionaire head of the Rand Corporation. He is also the Immortal Iron Fist, the latest in a long line of warriors who wielded the power, a master of Kung Fu, and defender of the ancient city of K'un L'un. He channels the soul of the dragon Shou-Lao making his fists into powerful weapons. He is among the best, if not the best fighter in the Marvel Universe. He has also been a member of The Defenders and the New Avengers.

Originally created to cash in on the popularity of Kung Fu films. Iron Fist first appeared in "Marvel Premiere" #15 (May, 1974), created by Roy Thomas and Gil Kane. He appeared as the lead in this magazine until issue #25 (October, 1975). Then was granted his first eponymous series "Iron Fist", which lasted for 15 issues (November, 1975-September, 1977). Roy Thomas had two inspirations, the Hong Kong classic martial arts movie King Boxer aka Five Fingers of Death (1972), which featured an "Iron Fist ceremony" and the chi enrergy and a Golden Age comic book character called Amazing-Man, created by Bill Everett, creator of Sub-Mariner.

Sales started to flag in the late 70s, until someone had the great idea to team him up with another low-selling series, Luke Cage: Power Man, as part of Luke's Heroes for Hire agency. The amalgamated series' popularity far outstripped both its predecessors. It was written by Chris Claremont, Mary Jo Duffy, Kurt Busiek and Christopher Priest, who notoriously finished his run by killing Danny. Needless to say, he didn't stay dead — in fact, it was Priest who brought him back. Since then he's had an important role during the Marvel Civil War, and even joined the New Avengers. Despite this, he's never really risen beyond B-list status.

Due to the success of the Immortal Iron Fist series, Iron Fist and his supporting characters have had a surge of popularity, earning cameos and roles in other Marvel comics, video games, and cartoons. He also had his own Netflix TV series, Iron Fist (2017), which was fairly faithful to the core concepts of the comics but received mixed reviews, and showed up in the linked The Defenders (2017), which made further use of the Iron Fist mythology.

Iron Fist has appeared in the following works: