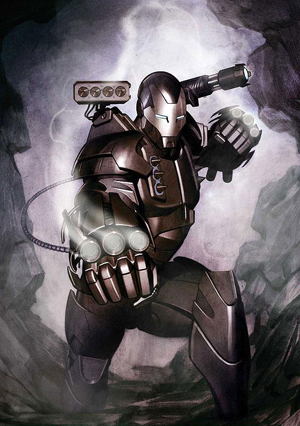 James "Rhodey" Rhodes is a Marvel Comics character created by David Michelinie and Bob Layton first appearing in Iron Man #118 (March, 1979). Stationed in Vietnam during The Vietnam War, then Marine combat pilot Lt. Col. James Rupert Rhodes first met Iron Man after his helicopter was shot down by Viet Cong rocket fire during one of his tours of duty. Iron Man himself, fresh off escaping his captors with a suit of armor made in a cave, with a box of scraps, encounters Rhodes. Together, they defeat the Viet Cong and fly to safety in a stolen helicopter.

After the war, playboy billionaire industrialist Tony Stark, who secretly was Iron Man all along, thanks Rhodes for saving Iron Man and offers him a job as Stark's personal pilot. Rhodes initially declines, but after trying other career options, including being a mercenary, he eventually takes Tony up on the offer. He also becomes the chief aviation officer.

Tony and Rhodes become close friends to the point where he becomes one of Tony's/Iron Man's secret keepers and given the nickname "Rhodey". When Tony was battling Obadiah Stane for control of his company as well as his own issues with alcoholism, Rhodey became Iron Man for a brief time. As the shellhead he successfully battled against Iron Man's Rogues Gallery and became a founding members of the West Coast Avengers (though they thought it was Stark at the time). Issues including headaches caused by the armor because the helmet was only calibrated for Stark during long-term use and being gravely injured in a bomb attack by Stane forced Rhodey to give up being Iron Man.

He became Iron Man a couple more times during his time at Tony's new company, Stark Enterprises, but only temporarily. When Stark seemingly dies, Rhodey takes over running Stark Enterprises and becomes Iron Man once again. This time he uses the Variable Threat Response Battle Suit, a silver and black suit with a mix of laser guided munitions, ballistic weaponry, a flame thrower and repulsor and unibeam technology used in other versions of Stark's armor. Designed for all-out warfare, the armor was nicknamed "War Machine". After discovering Tony faked his death, Rhodey quit the company. Tony told Rhodey to keep the "War Machine" armor stating that the armor always belonged to him (with it properly attuned to Rhodey's brain patterns of course). After which, he decided just to call himself War Machine while he wore the armor.

Rhodey and Stark would make-up and break up several more times with the former sometimes going solo or joining a separate cause from the latter. Eventually he would rejoin the West Coast Avengers, this time as himself using the War Machine armor. He would also join the Secret Defenders and Force Works (a reorganizing of the West Coast Avengers). He would also retire, only to join up with The Crew — without Power Armor at his disposal — after his sister was killed by a powerful street gang. Eventually, he returns to superheroics and is currently a member of the Secret Avengers. In 2014 he took up the identity of Iron Patriot, paralleling Iron Man 3. However, both versions of Rhodey would return to the more iconic War Machine name not long after. Rhodey would later die in Civil War II, but be brought back to life by Tony Stark using augmentations that Stark himself used to save his own life during the same crossover. For a time, Rhodey was too traumatized to be in the suit again, instead using the Manticore, a weaponized vehicle, but during Iron Man 2020 (Event), Tony figured out this was caused by aberrations in his DNA and was able to fix them, allowing Rhodey to become War Machine again.

Ever since he started wearing the Variable Threat Response Battle Suit, War Machine has been featured in media outside of the comics. His most notable appearances were in the Marvel Cinematic Universe films, played by Terrence Howard in Iron Man and Don Cheadle in all subsequent appearances.

Not to be confused with the future War Machine Video Game.

Tropes associated with War Machine include:

Rhodey caught off guard by the fact that Killian can breath fire.

Rhodey caught off guard by the fact that Killian can breath fire.