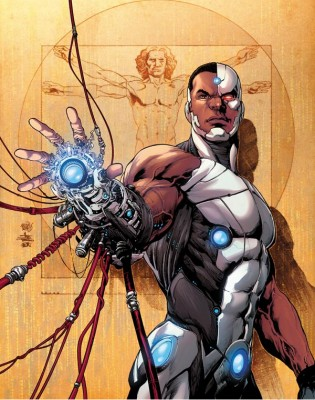 The science of grafting mechanical/electronic enhancements on organic creatures, oftentimes by replacing limbs with robotic parts or even mechanical weapons (such as an Arm Cannon), for instance, though often it's only called cybernetics if it's a smidge more complicated.

Cybernetics (from Gratuitous Greek for "piloting", because Everything Sounds Futuristic in Greek) is the study and development of regulated systems; a cyborg would be a human integrated with a control-feedback system.note Cybernetics is applicable when a system being analyzed is involved in a closed signaling loop; that is, where action by the system generates some change in its environment and that change is reflected in that system in some manner (feedback) that triggers a system change, originally referred to as a "circular causal" relationship

For example, a hearing aid sends amplified signal into the ear canal, and can be controlled with a finger on the volume. A pacemaker detects heart rhythms and sends its own impulses to regulate it. A peg leg neither sends nor receives signal, but more sophisticated prosthetics include voluntary control systems, and even some simulated tactile feedback.

As Hollywood Science, cybernetics in fiction often involves replacing an entire body except half a face/chest with mechanical parts and can go as advanced as having a lone brain reside inside a machine, while cybernetics in Real Life presently peaks at ocular implants with low frame-rate and gray-scale vision. If your generic Mad Scientist has a specialty in robotics, or even dabbles in it, you should expect this trope to come up relatively soon. Those who have been subject to cybernetics are called Cyborgs, as opposed to Androids, which are Ridiculously Human Robots. It's somewhat common in media that take place in the "present," and will almost certainly come up in storylines 20 Minutes into the Future.

There's also the matter of how one starts off. Cyborgs include biological humans with parts replaced with machinery, while machines with biological parts added are instead Wetware Body or Organic Technology (or if put together from scratch, an Artificial Human.) Whether or not this detracts from them being a person depends on the series. Sometimes as long as the brain is organic, in lieu of Brain Uploading, it's a person. Sometimes not even then.

In the original definition of “cybernetics,” it was the study of constructing machines by mimicking real organisms, e.g. building insect robots that process sensory and motion information like insects do. Thus, “cybernetic organism” can refer to such a pure machine. The “super-prosthetic” part came later, but it has overshadowed the earlier definition. “Bionics” is an older term from the design field, where it meant mimicking nature in order to get an elegant, functional product (see Victor Papanek's

for multiple examples). It was used much in this manner by Martin Caidin's early 1970s novel Cyborg, to describe mechanical prosthetics designed to look and act like real limbs, but in the adaptation of Cyborg into The Six Million Dollar Man, the "elements of nature" aspect was lost and it became a generic term for the enhancement of people with mechanical parts. Fortunately for those who use it for its original meaning, this definition is seldom seen anymore.

Common things used in cybernetics include the Restraining Bolt, the Arm Cannon and Artificial Limbs. On the highest level of tech we have Nanomachines infusing biological beings. Just be careful not to overdo it, if you're in a setting where Cybernetics Eat Your Soul or where they're treated as Power Upgrading Deformations. Often cybernetics is used as an excuse to bring someone Back from the Dead, even if the brain has been dead a while. One can certainly expect some questions about What Measure Is a Non-Human?, and an attempt to take over or “replace” mundane humanity is not out of the question. Of course, it's also possible for most cyborgs to be Pro Human Transhumans.

Note that in many cases, a Hollywood Style Cyborg will become super strong or super fast just from replacement of arms and/or legs. Actually, the replacement limbs would require extensive attachments throughout the body, otherwise, the limbs would rip themselves from the body, among other non-optimal outcomes.

Outside of transhumanist subculture, cyborgs tend to be viewed as one of the most horrifying monster types in existence by mainstream audiences. If you're trying to convince an audience that your villain is completely morally irredeemable, portraying them as a cyborg is one of the easiest and most effective ways to do it.

See its Super-Trope Transhuman for all ways of enhancement. May also overlapped with Human Weapon. If you're of a transhuman bent, prepare for a dose of I Want My Jetpack. Contrast Meat-Sack Robot, when organic components are grafted onto an artificial body.

For the DC Comics character, see Cyborg. For the movie, see Cyborg (1989).

He's an impromptu one, courtesy of the missile accident. Nearly half his face has been plated with cybernetics, and his voice has a synthesized rasp to it. Crash Team Racing: Nitro-Fueled also reveals that the eye surrounded with metal is fake, likely rendered unusable by the missile accident. In It's About Time, his right hand was replaced with a robotic hand for unknown reasons (though the explosion of his mech in Warped could have been the cause).

He's an impromptu one, courtesy of the missile accident. Nearly half his face has been plated with cybernetics, and his voice has a synthesized rasp to it. Crash Team Racing: Nitro-Fueled also reveals that the eye surrounded with metal is fake, likely rendered unusable by the missile accident. In It's About Time, his right hand was replaced with a robotic hand for unknown reasons (though the explosion of his mech in Warped could have been the cause).