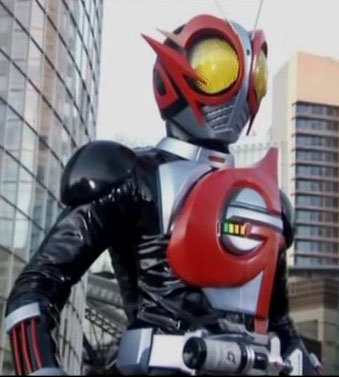 Kamen Rider G was a 20 minute short episode released in 2009. It's an Affectionate Parody of all things Kamen Rider.

In the year 2009 following the events of The War on Terror, a black ops anti-terrorist organization called Shade was created. After the Japanese government uncover some human-rights violations connected to their Super Soldier project, they shut Shade down and imprison their leader, Seizan Tokugawa.

At the TV Asahi building, members of the now-rogue Shade organization take everyone inside hostage. They interrupt filming of a show about wine, hosted by one Eri Hinata, and one of them, called "Number 5", comes to deliver their demands for the release of their leader. Eri recognizes Number 5 as Goro, the man who had promised to marry her three years before but had then disappeared. He didn't seem to remember her at all, however. After finishing the speech on-air he drinks some of the wine left behind by Eri, and his memories of his former life, and the brainwashing and modifications done to him by Shade to make him "remodeled human code G". He begins to fight against Shade for the sake of his love, as the lonely warrior of love, Kamen Rider G.