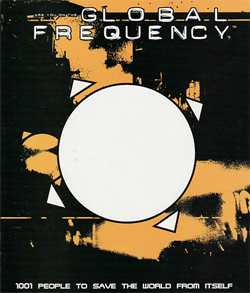 You are on the global frequency.
Advertisement:

Global Frequency is a short Graphic Novel series by Warren Ellis and drawn by a different artist every issue. It's built around a single idea: if The World Is Always Doomed, then why Hold Out For A Hero? What's stopping us from saving ourselves? Answer: not a damn thing.

Our main character is Miranda Zero. She's got a Mysterious, Dark and Troubled Past she's not at all proud of. She knows that modern politics have built a Crapsack World and decided to do something about it.

That something is the Global Frequency. Miranda has found and signed on 1001 unique talents from around the world, ranging from athletes to scientists and from cops to hackers. They're called on when the world needs saving, connected to Miranda's home base through a computer genius girl nicknamed "Aleph" who guides them through the mission. The story is fast-paced, with minimum backstory, and each issue features a different group of agents; apart from those who come Back for the Finale in the final issue, Miranda and Aleph are the only recurring characters.

They fight crime, Help The Helpless and Save the World with New Media. It's like a wiki. With guns. Some chapters focus on technology, others on politics, and still others on the supernatural. And Anyone Can Die.

Malfunctioning Lost Superweapon? They can track him, identify the tech, locate and interrogate the designer and Shoot the Dog if necessary. While The Men in Black are still getting dressed. Runaway Psycho Prototype? They can be on the scene with geeks, badasses and even an inside informant while The Government is still arguing whether or not to just Nuke 'em. Alien Invasion via The Virus? Terrorists Without a Cause? The Plague? The talent is out there to make it go away. Ordinary people can do extraordinary things with the right technology and a fair chance. Agent, You Are On The Global Frequency.

A pilot episode for a television adaptation was produced for The WB television network in 2004, aiming for a mid-season premiere in the Spring of 2005. The series executive producer and writer of the pilot was John Rogers (The Core, Catwoman (2004), Transformers, Leverage), with many high-profile names attached on the production staff, including J. Michael Straczynski (Babylon 5), Diego Gutierrez (Buffy the Vampire Slayer), Ben Edlund (Angel, The Tick), and David Slack (Teen Titans). Nelson McCormick (Alias) directed the pilot. A change in network management while the pilot was in production, and subsequent "differing creative visions and network/studio gunk" (as Rogers put it in his blog), resulted in the series not going ahead. The pilot has never been aired or officially released, but gained a cult following after a copy was leaked onto torrent networks several months later.

In 2009, The CW ordered another pilot, to be written by Pushing Daisies and Tales from the Crypt veteran Scott Nimerfro. Unfortunately, nothing actually happened, and according to an interview with Ellis in late 2010, the project had once again stalled.

In 2014, FOX announced that they are producing a pilot, produced by Jerry Bruckheimer. Unfortunately they announced in February 2015 that they won't order the pilot due to issues with the script.

This comic presents examples of:

The unaired pilot contains examples of: