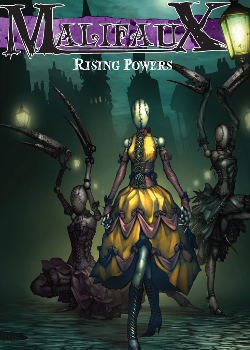 Malifaux is a Miniatures War-game manufactured by Wyrd Miniatures set in an alternate history/universe/dimension. The bulk of the story has taken place in an alternate dimension accessible through a magic gate known as "the breach", found in California.

In the setting magic has existed for centuries, as observers noted it was becoming weaker over time, in the late 1790s a portal was found in California that lead to another world where magic was still strong. On the other side of the portal the first explorers discovered an empty city; Malifaux. In addition to being a magic-heavy world, a resource was found in Malifaux: Soulstone, an ore that stored magical power and when used by mages back on Earth to supercharge, or even just use magic in Earth's magic-poor environment. After an initial colony was set up and a mining operation to extract and ship the soulstone to Earth had been running for some time, the breach that spanned the two worlds abruptly collapsed to the sounds of slaughter, and right before the portal slammed shut, a mutilated torso was flung out of it. One hundred years later the rift has reopened, with the city found to be completely empty of any human presence. The game is set four years after the breach reopened, round about the year 1900, in the city of Malifaux where the ruling body, known as the Guild controls the mining and shipping of soulstone, and maintains the only "Safe" area in the city.

The game's setting is described by creator Nathan Caroland as "Steamvictoriohorrorwestpunk".

There are seven main factions, within them there are sub-factions that revolve around variations on the theme of that faction, leading to considerably variety between "Crews" and their Masters, the ones who lead the crews into desperate, violent battles in horror city of Malifaux:

The Guild: Currently in charge of running Malifaux, they operate the mines, deal with the convict labor and try to hold off the predations of the other factions. Predominantly themed on wild west law enforcement, their sub-factions include the Witch-hunters who are basically licensed mage-cowboy fascists hunting unlicensed non-cowboy mages, the Ortega Family of Mexican gunslinger cowboys hunting demons, and the Death Marshals crazy coffin-wielding undead-hating cowboys. Overall this is the Jack-Of-All-Trades, Masters Of Shooting faction and depending on which Master is taken can be capable of pouring ridiculous amounts of fire on models left in the open, spell-spamming their opponents into submission or just rigorously applying steel to rotting flesh. Other sub-factions include two faced lawyers, generic soldiers, government propaganda journalists, frontier bounty hunters, and steampunk robots.

The Arcanists: Comprised of several semi-secret groups led by mages that are opposed to The Guild's stranglehold, they form a very loose alliance aimed at fighting The Man. Their sub-factions include a Genetic engineering druid cult, an Ice magic worshiping cult and the Miners and Steamfitters Union (the guys who patch-up those steam-powered doom spiders, not a cult). The Arcanists are a trick-based faction that rely on spells to help get the job done, they are quite varied across the Masters in terms of play-style and have more spell-dependent Masters than the other factions.

The Resurrectionists: Token Undead faction, although each of Masters are a quite distinct flavor of necromancy. The Resurrectionists are mages who are fascinated with death, souls and unhealthy surgery, they stand apart from The Arcanists due to Ethical differences. Sub-factions include Undead Hookers led by a Jack The Ripper Ersatz, Punk-Samurai-Zombies, as well as a standardized Frankstein-type scientist with stitched-up Zombies. Recently the acquired star-crossed lover who weaves control over ghosts. Despite all sharing the common traits of Undead, a common theme is moderately sized crews rather than spamming hordes, although this is a viable for some Masters, a lot of the time they can replace casualties rather than simply increase their numbers, making them handle attrition better in longer games, in addition to their replaceable traits they tend to have slightly tougher models than the other factions, at the cost of speed and ranged firepower.

The Neverborn: Unlike the other factions, this group is comprised of the original inhabitants of the dimension that Malifaux exists in, and they want their land back. Sub-factions are Voodoo ghouls, Demon-Vampire Hybrids, bizarre child-like entities of sadness and finally the sentient nightmares springing forth from a possibly insane 8-year old's mind. The Neverborn favor a hit-and-run strategy, lacking any real tough units they rely on sheer speed, morale affecting abilities and unusual tricks to strike and withdraw before any damage is sustained, veritably the Fragile Speedster faction.

Outcasts: Not a united faction but a loose group of models that have their own agendas - from steampunk Necromancers, to a possessed ratcatcher that is a dark Pied Piper, to professional German mercenaries. This faction is a grab-bag of the other elements that don't fit into the larger factions, very similar to the Mercenaries and Minions factions from the Iron Kingdoms games.

Gremlins: Another group of Malifaux's native inhabitants, the bayou-dwelling Gremlins are Malifaux's goblins. They ape human culture, and their lack of intelligence and self-preservation instinct is eclipsed only by their boundless enthusiasm and numbers.

Ten Thunders: A new faction that represents an ancient Clan from Asia working its way through the power structures of Malifaux. All masters bar one, who is a Bare-FistedMonk hosting an Eldritch Abomination, are joint faction models, representing their deep cover assignments to manipulate all of Malifaux, their number include a ninja assassin leader with power over thunder, a club-owning, drug-dealing, curse-spreading cardshark who hangs out with Neverborn skinwalkers while being haunted by his own literal personal demon, an Adventurer for the Guild with an interesting arsenal of relics and thugs, a kung-fu fighting railway construction unionist who uses a fighting style inspired by her industry and a not 100% intentionally reincarnated ancestral necromancer who can build up skill trees over the course of a game.

The game itself is thematically similar to Games Workshop's Mordheim skirmish game, and shares some similarity with Deadlands.