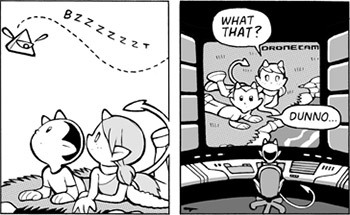 A small (usually basketball sized or smaller) robot whose purpose is to record or transmit an A/V feed. Usually hovers, but other variations exist.

They sometimes overlap with Spy Bots but are more closely related to harmless Attack Drones, likewise, sometimes they are magical instead of technological in nature.

As Sinister Surveillance, many these bots are iconic ways to identify the setting as a dystopia of Big Brother Is Watching.