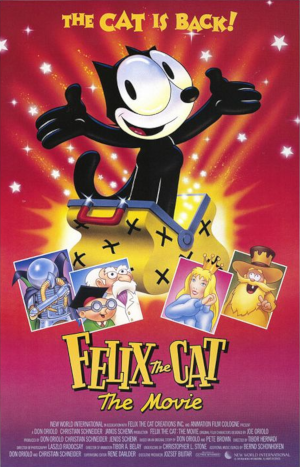 Featuring Felix, all his wacky friends, and a lot of Deranged Animation.

Felix the Cat: The Movie is a feature-length film from The Renaissance Age of Animation, starring Felix the Cat (specifically, the Joe Oriolo incarnation of the character) a Funny Animal who walks the earth and happens to own a Magic Bag of Tricks, who travels into another dimension after being summoned by a sentient teardrop to save the Kingdom of Oriana and its Princess from her Evil Uncle, the Duke of Zill, and his army of robotic cylinders.

The film was produced by Joe Oriolo's son, Don Oriolo, who was largely working in the music business at the time, in an attempt to rejuvenate interest in the Felix the Cat series; in the mid to late 80's, the series had become all but forgotten in the mainstream, to where the series had exactly one license to its name. He wrote the story and intended his father to direct it, but Joe's poor health forced Don to enter the animation business to see the film finished himself. It was animated by Pannonia Film Studio in Hungary, and directed by Tibor Hernádi. The film is estimated to have been completed in 1986 or 1987, but it only received limited release in 1988 and 1989, finally getting a proper U.S. release in August 1991. The film tanked miserably at the box office, but it aired frequently on the Disney Channel for a few years afterward; along with subsequent VHS re-releases, this allowed the film to gain a small following. For better or worse, the film did succeed in its goal of getting Felix back into the public consciousness, as tie-ins like video games, comic books and even a brand new Felix show would follow in its wake.

Felix the Cat: The Movie provides examples of the following tropes:

Felix the Cat: The Movie

A family of foxes randomly appear and mark their territory on Felix's bag.

Felix the Cat: The Movie

A family of foxes randomly appear and mark their territory on Felix's bag.