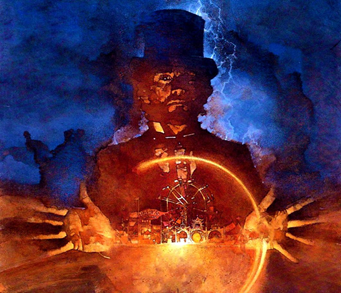 Visit Mr. Dark's Pandemonium Carnival today! You'll get everything you ever wanted...
"Ladies and gentlemen! Boys and ghouls! Step right up! Behind this curtain lies a ghastly concoction of... Delight! Horror! Fantasy and terror! Your every wish is our command! Your every whimsical desire brought to life! But I'm warning you... there's always a price! Welcome to the greatest show unearthed!"
— Creature Feature, "The Greatest Show Unearthed"
Advertisement:

Although not quite as popular as evil clowns, evil ringmasters are becoming more and more common in fiction. Basically, this trope can be defined as any evil, scary, or morally ambiguous character who runs a circus or carnival. If a character does not run a circus, this trope can still apply if they have a ringmaster-like appearance or theme. Perhaps the reason for this trope is because ringmasters are the leaders of circuses, which makes for a great Big Bad, with the clowns and other performers as Mooks. Another possible reason for this is The Barnum trope. As noted on that page, the Trope Namer, P.T. Barnum, was incorrectly credited with the quote "There's a sucker born every minute." Because of this, Repulsive Ringmasters tend to be portrayed as Con Men. The most mundane examples tend to be guilty of, at least, animal cruelty and the increasing public consciousness of this is probably another factor that contributed to the rise of this trope.

It's also worth noting that, because of the lack of sound systems, ringmasters in the olden days had to shout to be heard. Because of this, evil ringmasters tend to be extremely hammy. Thanks to their long coats, mustaches, and top hats, many evil ringmasters fall into Dastardly Whiplash territory (although, instead of an all-black outfit, they'll usually wear a bright red jacket with black pants and hat). It is also common for ringmasters in fiction to be seen abusing their animals and performers. If the ringmaster fights, expect his or her Weapon of Choice to be a whip or a cane.

In an actual circus, the "ringmaster" is the master of ceremonies who introduce the acts. The actual name for the role usually called "ringmaster", as per the general irreverence of circus folk, is "Fancy Pants".