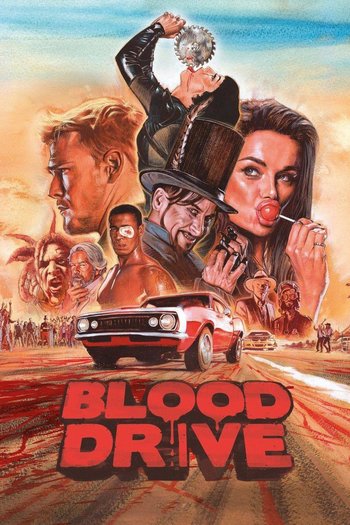 Blood Drive is an action-comedy-gorefest series that premiered on Syfy in June of 2017.

Los Angeles, 1999. The world has gone to shit. Oil is $2000 a barrel, crime runs rampant, resources are scarce and things are just generally bad.

In the middle of all this is Arthur Bailey (Alan Ritchson), goody-goody employee of Contracrime, doing his best to make things better for the impoverished citizens.

Along with his partner Christopher, Arthur stumbles onto a hedonistic party of madness, run by the diabolical Julian Slink. He's putting on a race, the titular Blood Drive. A cross country slaughter-fest of blood, babes and debauchery. And Arthur finds himself shanghaied into participating, as does his partner, the mysterious Grace D'Argento (Christina Ochoa), who has her own reasons for racing.

Now with explosives in their necks, the two join forces to combat fat Elvis Impersonators, nutjobs dressed like clowns, cannibals and all the other insanity of their America.

...Did we mention the cars run on human blood? Yeah, it's gonna be a bumpy ride.

Cancelled following the end of its first and only season.

Not to be confused with the video game of the same name, although both share similar themes.