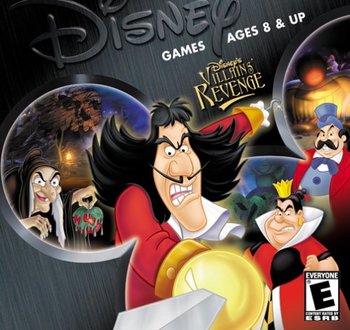 "Without you, there will be no happy endings."
Advertisement:

An uncharacteristically dark Point-and-Click Game, created by Disney Interactive Studios and released for PC in 1999.

The game begins as Jiminy Cricket hosts a storytime session consisting of Snow White and the Seven Dwarfs, Dumbo, Alice in Wonderland, and Peter Pan. He soon gets bored reading the same stories he's read several times before, and decides to instead challenge the player to match each story with its ending. However, after he tears the pages out of the storybook, visions of Disney Villains appear in the air.

After the visions end, the Blue Fairy enters and informs Jiminy that when he removed those pages, he inadvertently prevented the book's protagonists from finding Happily Ever After, and now Queen Grimhilde, the Ringmaster, the Queen of Hearts, and Captain Hook reign victorious. Now, Jiminy and the player must enter the stories' universes, restore the heroes' fates, and finally engage in a four-on-one battle with the villains.