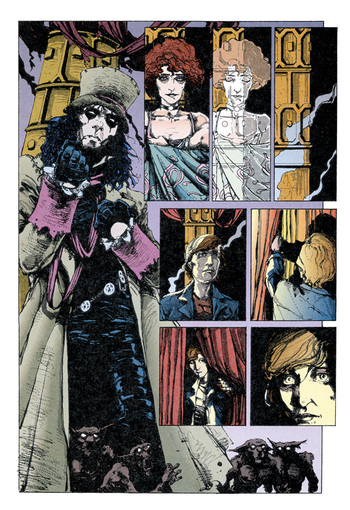 The Last Temptation was a limited comic series originally published in the now defunct Marvel Music imprint and republished in a collected volume by Dark Horse. It was developed by Neil Gaiman and Alice Cooper originally as Cooper's concept album of the same name, but eventually was adapted as a comic by Gaiman and illustrated by Michael Zulli.

The story focuses on a boy named Steven who, on the day before Halloween, encounters the Showman and his Theatre of the Real. Inside Steven is treated to a show of all the horrors of the future, and the loneliness and doubt that adulthood offers. While this fails to crack Steven's will, he does find himself taken with the Showman's lovely female assistant, Mercy. After leaving the theatre, the Showman proceeds to attack Steven's sense of security through various mind games and eventually offers him an escape from having to face the future, for a price of course.

Not to be confused for the trope The Final Temptation, which ironically enough doesn't really appear in this story.