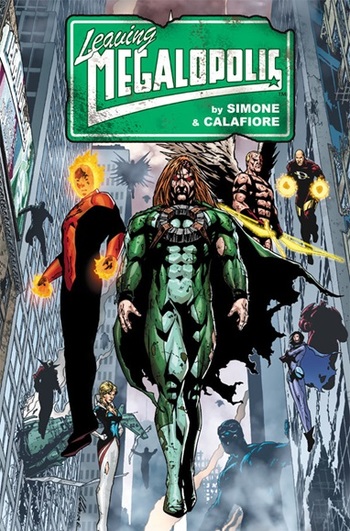 Leaving Megalopolis is an original graphic novel written by Gail Simone and illustrated by Jim Calafiore, both of whom previously worked together on Secret Six. The book was crowdfunded and distributed by Kickstarter in 2014 before being formally republished by Dark Horse Comics, which also published the sequel miniseries Surviving Megalopolis.

Megalopolis was once considered the safest city in America thanks to its abundance of superheroes. Overlord, Fleet, Southern Belle, the Mite Brigade, and many others protected the fair citizens of this gleaming city. Then one day something happened to the heroes, and they suddenly turned into Ax-Crazy maniacs. Now the city is under quarantine by the U.S. military. No one can get in, or out, and for some reason, the heroes don't want to leave. And they don't want anyone else getting out either.

Leaving Megalopolis told the story of a ragtag group of survivors trying to find a way out of Megalopolis while avoiding detection by any of the many bloodthirsty former heroes, and the citizens who'll do anything to appease said former heroes.

Surviving Megalopolis, the sequel, is about said group of survivors returning with the aid of a mercenary team to rescue the friend they had to leave behind. And at the same time, a very important question gets answered: when the heroes went crazy, what happened to Megalopolis' villains?