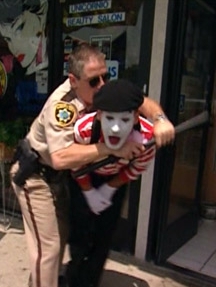 "You have the right to remain silent. Anything you mime can and will be used against you in a court of law."
Until I came here to America, I'd never realized that you were right: nobody in the world likes mimes.
— David Bowie's 60th Birthday Message to John Peel

Mimes are sometimes hated in fiction. They're an Acceptable Professional Target of sorts. No real reason is ever given, but the Uncanny Valley may have something to do with it - after all, their pure white faces and refusal to speak give them a definite alien aura. This trope isn't limited to people who hate mimes, but also works of fiction that seem to have it out for them. In other words a character doesn't have to say "I hate mimes" for it to be this trope. All the character needs to do is fall on, punch, kick, or otherwise cause intentional or accidental harm to a mime. A variation of this is Everyone Hates Morris Dancers, without a reason for it ever being given.