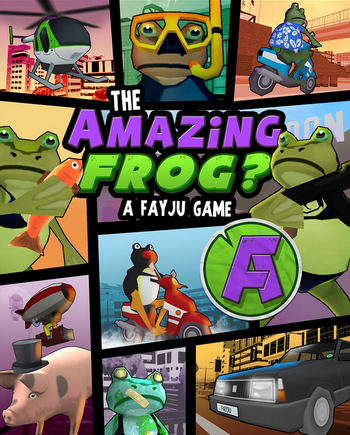 The Amazing Frog? started out as a simple game for Ouya, where you play as anthropomorphic frogs trying to get mad air yo by jumping on bouncy castles, trampolines, explosive barrels, and blimps.
Advertisement:

After publishing version 1.12 in 2013, Fayju decided to upgrade the game into a full Wide-Open Sandbox. This could only be done on PC, and they couldn't do it all at once, so in November 2014, it entered Steam Early Access, where it is now being worked on to this day.

It is now a game where you can do new things like drive cars and ride pigs, enter new locations such as the underground sewers and outside the walls of Swindon, and no known plot.