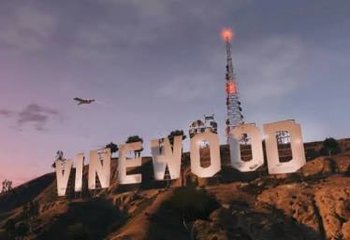 The Hollywood Sign is a sign on Mount Lee overlooking Hollywood, Los Angeles. It consists of 44-foot tall white letters spelling out HOLLYWOODnote It originally read "HOLLYWOODLAND" for a housing development in the area, but the "LAND" was removed following a collaborative restoration effort in 1949 that ensured the sign reflected the whole district. Because of the obvious glitz and glamour associated with the area, as well as its proximity to America's oldest studios, the sign is one of the most iconic symbols in American pop culture. Unsurprisingly, it has its own share of mock-ups and parodies, with fictional communities often planting their own white block-letter signs on their surrounding mountains. Bonus points if the sign overlooks a No Communities Were Harmed version of Hollywood.

When the sign is used to establish a setting as being in or around Hollywood, see Eiffel Tower Effect.

May overlap with Rushmore Refacement.