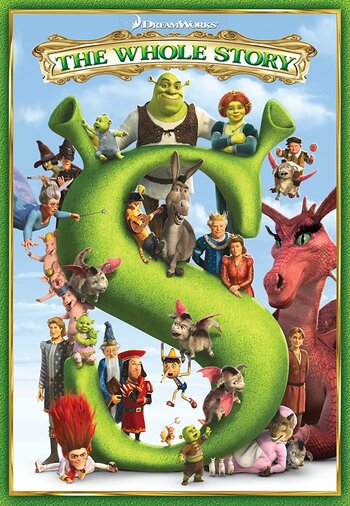 All together again for the first time.
"The greatest fairy tale never told."
— Tag Line for The First Chapter
Advertisement:

A CGI-animated tetralogy by DreamWorks Animation, loosely based on a 1990 children's book by William Steig about an ogre in a fairy tale land who just wants to live in his swamp undisturbed, but finds himself dragged against his will into fighting for the fate of entire kingdoms.

Notorious for its humor, both witty and slapstick, for turning everything we knew from fairy tales upside-down, and for a ridiculously modern feel of its medieval fantasy setting. The first film's huge success (combined with it easily outdrawing the Disney Animated Canon entry Atlantis: The Lost Empire, which opened a month later) convinced DreamWorks that 2D is dead, and scrapped their 2D films all together, "apologized" for them, and even convinced other executives in the same idea, paving the way for all films thereafter — it is unclear if 2D films will regain top priority again. Shrek was the first film to win the Academy Award for Best Animated Feature. Shrek and its sequels are DreamWorks' defining hits, "Fiona's Theme" plays during the studio's Vanity Plate in all their animated films now, and the character of Shrek is now their unofficial mascot.

There is also a Christmas Special, Shrek the Halls, and a Halloween Special, Scared Shrekless. Finally, there's an extensive series of tie-in games of varying quality.

According to DreamWorks Animation CEO Jeffrey Katzenberg, there has been talk about developing a fifth Shrek film, as the series was originally planned to be a pentalogy. By 2018, Shrek 5 was officially put into development, with Illumination Entertainment head Chris Meledandri serving as a producer.

Somebody once told me the world is gonna roll me...