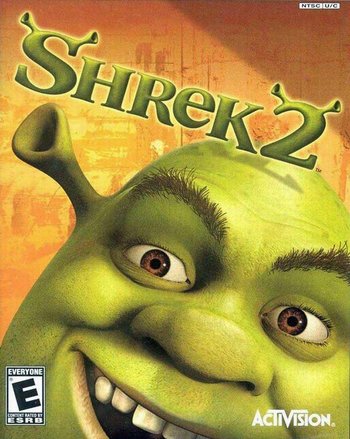 Shrek 2 is a licensed game based off the hit animated movie of the same name. It's a Beat 'em Up action-platformer with collect-a-thon elements that was released on Playstation 2, Xbox, and Nintendo GameCube. The game was also released on PC as Shrek 2: Team Action, in order to differentiate it from a different game on the same platform also titled Shrek 2.

Unlike the first game, which completely eschewed the parent film's plot and setting in favor of an original story, Shrek 2 follows the movie's plot. Like most video game adaptation of films, Shrek 2 takes the Adaptation Expansion approach, adding in new events and expanding upon ones that were only briefly touched on in the movie proper.