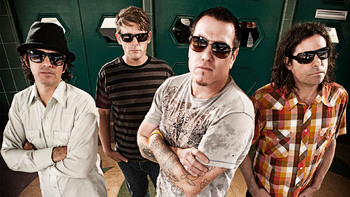 Smash Mouth is an alternative rock band who started in 1994 in San Jose, California—with Steve Harwell (lead vocals), Greg Camp (guitar), Paul De Lisle (bass) and Kevin Coleman (drummer), as well as session musician-turned core member Michael Klooster (keyboards) and various turntable operators. The line-up has since changed quite a bit, with only De Lisle remaining after Harwell retired in 2021.

Most famous for their album Astro Lounge and the hit single "All Star", a quintessential late-nineties party tune which debuted in the movie Inspector Gadget for one scene, then later used to promote Mystery Men and would be used in other films such as Digimon: The Movie and Rat Race, but was immortalized through its inclusion in the first Shrek film.

Some of their less-popular albums have received the highest critical praise, such as their debut Fush Yu Mang, which reached double platinum. After Astro Lounge was released, they went from being pretty underground to pretty popular, which drove away their original fan base.

Though initially a Ska Punk band, they later added synthesizers and a few experimental elements, and a production heavily-influenced by Surf Rock and Psychedelic Rock of The '60s. Songs generally contain lyrics about the standard sex, drugs and rock 'n roll, but they also satirize politics on occasion, if only in a lyric or two. (See "Stoned

," which pokes fun at then-President Bill Clinton's infamous claim that he "didn't inhale.").

Some-BODY once told me the tropes were gonna roll me, I ain't the sharpest tool in the shed...

BODY once told me...
Feedback