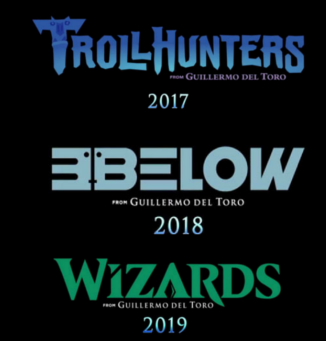 Arcadia is a strange place.
Advertisement:

Tales of Arcadia is a trilogy of CGI animated series created by Guillermo del Toro, produced by DreamWorks Animation and Cha Cha Cha Films, that are exclusively streamed on Netflix. The trilogy was announced in 2017 along with the second season of the first series Trollhunters.

Arcadia seems like your average small American city, but unbeknownst to many of even its own citizens, the sleepy little Californian town holds some amazing secrets. Ferocious trolls live beneath the city streets, alien royalty from another world are hiding next door, and powerful wizards walk the streets. Magic is everywhere and it's attracting some very nasty customers who want nothing more than to claim it all and rule the world. It's up to our various young heroes and their loyal allies to stop them, all while balancing the normal life of your average American teenager.

Tropes present in the whole franchise: