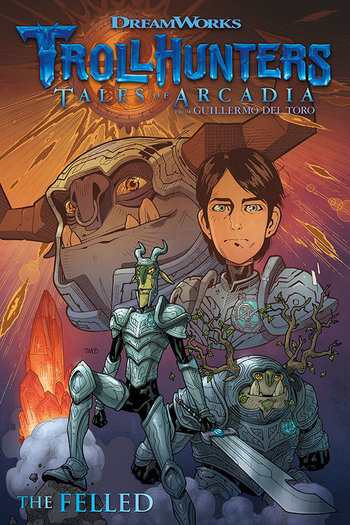 Trollhunters: Tales of Arcadia — The Felled is a Graphic Novel published by Dark Horse Comics set within the events of Trollhunters.

The title of Trollhunter weighs heavy on the shoulders of Jim Lake, Jr.—as does his new title of "boyfriend"—and it has lead him to a crisis of identity. To help the young man grasp who he is, the Trolls, Vendel, Blinky, and AAARRRGGHH!!!, and his best friend, Toby, look at the adventures and misadventures of six previous Trollhunters during times when they, too, questioned themselves. Through their stories Jim discovers how Trollhunters Deya the Deliverer and Kanjigar the Courageous—and others—used their different attributes to be the best they could be . . . And how he can try to do the same.

The Felled provides examples of: