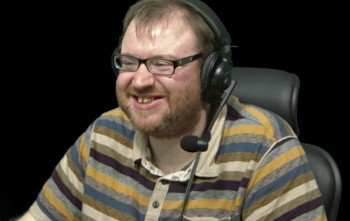 Simon Lane is the co-founder of the Yogscast, and known for co-op Let's Play series of numerous games, including World of Warcraft and Minecraft, to which he frequently pairs up with Lewis Brindley. He also participates in the Creepy O'Clock series of horror game Let's Plays with Hannah Rutherford. Along with Lewis, he hosts the podcast The YoGPoD.

Frequently known for his ineptness at video games, including Minecraft, since he began playing in 2010. Lewis' introduction of Simon's wit to the Internet in useless How-to guides for World of Warcraft bosses is generally cited as the reason for the Yogscast's existence.

Due to his Minecraft skin being a stereotypical dwarf, Simon roleplays as a dwarf of Khaz Modan (a nod to his long-standing fandom of World of Warcraft) sometimes known as Honeydew in various Minecraft series.

His YouTube channel (shared with Lewis) can be found here