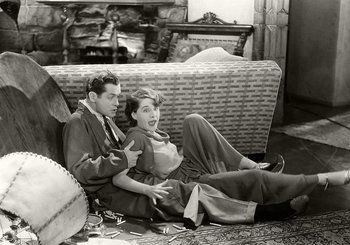 Private Lives is a 1930 comedy of manners by Noël Coward. It focuses on a divorced couple who discover that they are honeymooning with their new spouses in the same hotel. Despite a perpetually stormy relationship, they realise that they still have feelings for each other, and run away to a chalet in Switzerland. After a few days of bliss, their antics — which drove them apart before — creep back.

Adapted into a 1931 film directed by Sidney Franklin, with Robert Montgomery and Norma Shearer in the leading roles.

Tropes featured in the play and film include: