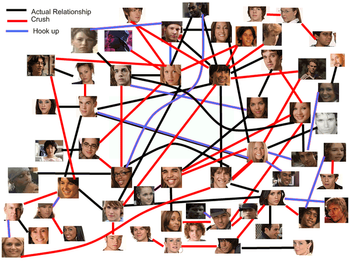 Hang on, hang on. I'm gonna get some thumbtacks and colored strings so we can diagram this.
"You kids change partners more than square dancers!"
— Kitty, That '70s Show
Advertisement:

The Dating Do Si Do is the tendency for a long running piece of fiction to recycle characters. In shows dealing with relationships especially, the tendency is that the longer the story goes on, the greater the likelihood that everyone will at some point have been in a relationship with (or at least slept with) everyone else. Well, usually not quite everyone, but still, the number of people having been in a relationship with other people is probably greater than could be expected under normal circumstances.

Usually it seems to be done to avoid introducing new characters. Unlike a Love Dodecahedron, a series that enjoys this dance does not necessarily have any of the couples being in competition with each other.

As can be noted, this is especially common in long-running series that still keeps a fairly regular cast.

Compare No Going Steady and No Loves Intersect.

Named after the Do-si-do, a figure in several dances that involve the dancers switching partners.