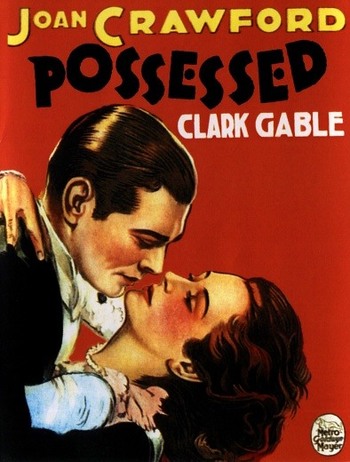 Possessed is a 1931 film directed by Clarence Brown, starring Joan Crawford and Clark Gable. (And they're billed in that order, with Gable after the title, since Crawford was the established star and Gable was just hitting it big).

Marian Martin (Crawford) works in a cardboard box factory in Erie, Pennsylvania. She has a suitor in fellow laborer Al Manning, but Marian wants out of her grim lower-class existence. A chance encounter with alcohol-drenched rich dude Wally Stuart inspires Marian to go to New York for the express purpose of landing a rich man.

Marian is young and good-looking so she succeeds, landing one Mark Whitney (Gable), an ambitious, high-powered lawyer. The only problem is that Mark refuses to marry her; Mark was scarred by an ugly divorce involving an adulterous wife and refuses to expose himself to that again. So Marian becomes a kept woman. At first they're both OK with this, but eventually Marian starts to chafe at the social stigma of being a mistress, while Mark gets political ambitions that don't jibe well with having a mistress.

No connection to a completely different film called Possessed from 1947 that also starred Joan Crawford.