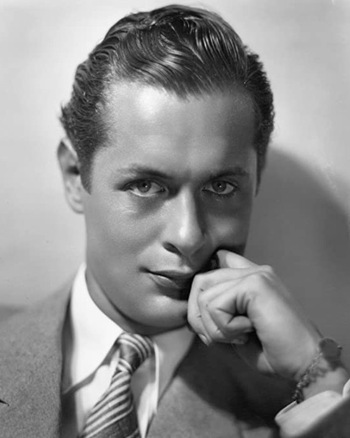 "He was both a handsome lead and a comedian... and at a time when the package wasn't typical. Until Cary Grant came along, Montgomery held the patent."
— Mick LaSalle
Advertisement:

Robert Montgomery (born Henry Montgomery Jr.; May 21, 1904 – September 27, 1981) was an American actor who appeared in films throughout The Golden Age of Hollywood. However, his best-known work to many is from The Pre-Code Era.

He began his acting career in theatre, leading him to be popular enough to catch the attention of George Cukor and MGM, practically giving him easy access to Hollywood. His first film was So This is College in 1929 and he appeared in a few comedies, despite his interests mostly being in dramatic movies. After the studio reluctantly allowed him to appear in dramas The Big House and Inspiration with Greta Garbo in 1930, Montgomery became a household name. He continued in dramas throughout the 1930s with popular actresses like Norma Shearer, Myrna Loy, and Joan Crawford; 1937's Night Must Fall was dramatic enough to earn him his first of two Oscar nominations.

Montgomery's acting career paused for a few years as he served in the US Navy during World War II, retiring as a lieutenant commander. He made occasional appearances in films, particularly 1941's Mr. and Mrs. Smith with Carole Lombard, but also made a few directing debuts as well: his first being Film Noir Lady in the Lake, which confused critics and audiences with the camera techniques that only showed him onscreen a few times, despite being the protagonist. When the movie industry became crushed by television, Montgomery hosted a TV series throughout the 1950s called Robert Montgomery Presents, which won an Emmy, but his last movie was The Gallant Hours in 1960 with James Cagney.

Outside of Montgomery's screen career, he had a variety of other experiences, such as teaching Dwight D. Eisenhower television presentation styles, owning his own office in the White House, being president of the Screen Actors Guild twice, and has two stars on the Hollywood Walk of Fame for film and television. Modern audiences might have seen his daughter Elizabeth make appearances in films and television shows, such as Bewitched.