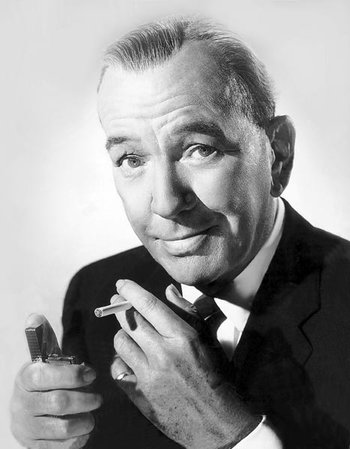 "Just say the lines and don't trip over the furniture."
Advertisement:

Sir Noël Peirce Coward (16 December 1899 – 26 March 1973) was a British playwright, actor, and songwriter most active in the twenties and thirties. Known for comedies featuring the upper class, usually with himself as star and director, and musicals.

In World War II, he talked Winston Churchill into making him an agent for British intelligence, and proved to be surprisingly good at it; his reputation as a comic celebrity helped loosen a lot of lips of the enemy. In the fifties he had a resurgence as a singer, singing his own comic songs.

He was also an actor, mostly on stage, but with several film roles, including a memorable turn as the criminal mastermind Mr Bridger in the original The Italian Job. He gave director David Lean his big break, asking the then-editor to co-direct his war film In Which We Serve.

The other thing that's inevitably going to come up at some point is that he was as camp as a row of tents, and although he refused to discuss his private life while he was alive, nobody was much surprised when his authorized biographer confirmed after his death that he was gay. He was close friends with several notable women including Elizabeth Bowes-Lyon, The Queen Mother and Gertrude Lawrence.

Works by Noël Coward include:

Other works by Noël Coward provide examples of: