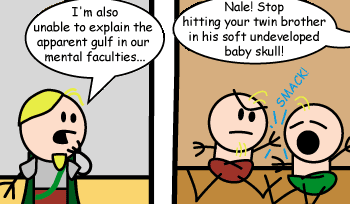 Kitty: What is wrong with you?! Were you dropped on your head?!
Kelso: Yes! I WAS! And up until now, everyone had the good grace not to mention it!
— That '70s Show
Advertisement:

A explanation for a character's eccentricity, ditziness, lack of intelligence, brashness or the like is for them (or others) to harm their head as a infant or a child. A possible cause of this trope could be that they were accidentally dropped by their Alcoholic Parent, who had a little too much to drink. In some cases, they were actually pretty intelligent before the incident happened. One variation of this trope is that the character's mental deficiencies are not from a head injury but by them ingesting something harmful and toxic such as paint chips or alcohol. Another is that the brain damage was due to the character being deprived of something that's essential or substantial to having a relatively healthy body.

If this trope is Played for Laughs, a character may jokingly or cheerily suggest to the others that a daft moment that another character (who usually has no disabilities and is mostly functional otherwise) just had was due to them injuring their head in their childhood. However, if it's Played for Drama and the character genuinely had head trauma in the past, it's used as an indication that the character was abused as a child or had a very dysfunctional childhood (they may also have a head deformity because of it).

Related to Easy Amnesia, Tap on the Head, Hard Head, Circling Birdies. Contrast Early Personality Signs, which are hints of someone's future personality but unlike Childhood Brain Damage, it's implied that it's natural and not the result of an injury.

A classic example of a Hilariously Abusive Childhood.

Sussie is shown as a verbose and intelligent infant, until Darwin bumps into her parents and they accidentally drop her. When they pick her up, she's making the bizarre noises she typically makes in the present.

Sussie is shown as a verbose and intelligent infant, until Darwin bumps into her parents and they accidentally drop her. When they pick her up, she's making the bizarre noises she typically makes in the present.