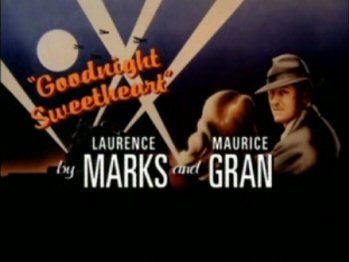 An unusual Brit Com whose premise is that Gary Sparrow (Nicholas Lyndhurst), a down-on-his-luck TV repairman in a failing marriage, discovers a time portal which leads to 1940s London. Once there, he meets a young woman and they fall in love. And now suddenly there's no need to go through the trauma of a divorce in the 1990s, because he can have two separate lives...
Advertisement:

Gary gets away with it by having his best friend Ron, a printer, print him easily-forged 1940s white banknotes to fund his past lifestyle. He justifies his knowledge of the future events of World War II to Phoebe (his past wife) by claiming to be a secret agent, while he says he earns his money as a singer-songwriter, passing off much of the next fifty years of popular music as his own. Eventually Gary ends up running a 1940s memorabilia shop built over the time portal, whose merchandise, while genuine, is suspiciously well preserved.

Came fiftieth in Britain's Best Sitcom. The series originally ran from 1993 to 1999 and a one-off revival episode aired in 2016.