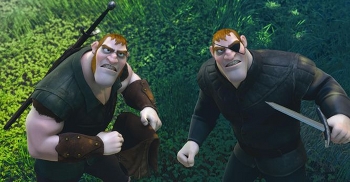 Being identical twins is awesome! You have an identical best friend and worst enemy. (...wait, there's a difference?) Best of all? No one can tell you apart! ...except you are not one person, and having everyone constantly confuse the two of you can get grating very quickly. So the twins will develop different clothing styles, hair styles, and mannerisms to help differentiate themselves. They now have two identities rather than one... though they may ensure the superficial changes are small/impermanent enough to allow for future Twin Switches just to keep messing with people.

If one twin is absolutely sick of the prospect of their twin and them being confused, or has a falling out with their sibling and no longer trusts them with casual impersonation, they might make permanent alterations such as tattoos, scars, piercings, very deep tans, or even cosmetic surgery to really avoid confusion.

This also works as a visual aide in TV and film. If the twins were exactly alike, it could grow confusing for the audience to constantly keep track of which twin is doing what.

This is almost always Truth in Television — usually either because there's a biological distinction (e.g., a mole on one's cheek that the other doesn't have, a widow's peak in one's hairline, etc.) or because they like to do something to differentiate themselves (like a different hair style — even a different hair colour, sometimes). This usually happens naturally over time as the twins reach adolescence and older, and grow out of the cute dressing-alike phase and seek something to differentiate themselves from each other. Yet more Truth in Television: even identical twins can be told apart by their fingerprints. One thing which is normally ignored (even in online guides for telling twins apart) is that the navel is a scar, and as such, can be as different for twins as for anyone.