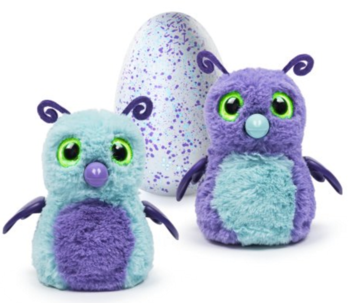 Who will you hatch?
Advertisement:

Magical eggs that comes from the land of Hatchtopia, Hatchimals are Mix-and-Match Critters who charmed their way into being the top holiday toys of 2016. The gimmick of these creatures is that they manage to hatch by themselves and can grow up (mentally) from baby to child. Created by Spinmaster in that very year, the franchise has grown to include blind bag eggs, novels, and an Animated Adaptation in the form of short animations.

In early 2017, a branch of the franchise called CollEGGtibles was released. They are Funsized versions of the existing characters plus many, many more Hatchimals. Similar to their larger counterpart, these critters do come in eggs, but must be cracked open by hand to reveal who's inside.