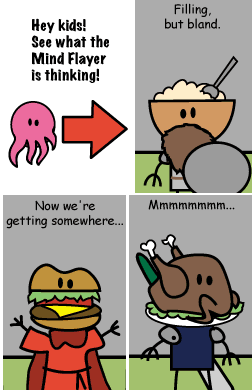 "I suspect it would be like most cartoons. You know, we'd start to go nuts after a while and I would look at Homestar and he would look like a big steak. And then Homestar would look at me and I'd look like, you know, some kinda brownie sundae. So we'd chase each other around the island, trying to eat each other. And at some point, my foot would look like a sandwich, and I would put salt on it and try to eat it, and it's like 'Oh, it's my foot!'"
— Strong Bad, Strong Bad Email #52 "island"
Advertisement:

A character has been suffering from hunger for days or weeks, and begins to hallucinate. Is that a delicious steak dinner, a giant hot dog, or a large roast fowl sitting right next to him? No, it's one of their friends, who is now staring back at him oddly, wondering "Why Are You Looking at Me Like That?"

This most often occurs with shipwreck survivors or castaways (especially if stranded on a "Far Side" Island), but it can occur in less dire situations too, such as fasting or dieting.

To clarify, Meat-O-Vision can apply to any kind of food, not just meat.

If said character goes through with it, it transitions to No Party Like a Donner Party. Compare Vein-o-Vision and Cold Turkeys Are Everywhere. See also Delicious Distraction and Obsessed with Food. Horror Hunger can have vampires, werewolves and other monsters looking at humans like this should they go without for too long. If the would-be meal wants to be eaten, see Let's Meet the Meat. Compare Delicious Daydream for normal daydreams to do with food.