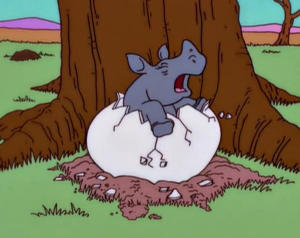 In the natural world, living creatures have a myriad of ways of bringing more young into the world. Some produce thousands of eggs and young that grow quickly but only a few make it to adulthood. Others invest huge amounts of time and resources to develop and take care of only a few at a time.note These are called r and K-type breeding styles, respectively. There is considerable debate on where humans fall on the scale, as compared to animals like salmon, aphids, or rats, humans breed quite slowly and invest a lot of energy into each offspring, but compared to animals like whales, elephants, or other apes, which barely breed above replacement rate, we breed like rabbits.

In fiction, it's often simplified into laying eggs, even if the biology of the creature in question should indicate otherwise. This is very useful in bypassing the complications of an Interspecies Romance and the Squick of a live birth, which is also why it's a common implementation of G-Rated Sex.

Popular Mons trope, as pretty much every Mons series uses it. Especially the ones that originate in video games, where it also serves to simplify the breeding mechanics — see Hot Skitty-on-Wailord Action. May also overlap with Cosmic Egg, if the egg in question produces or is laid by a deity. Compare Egg-Laying Male if the species has the ability to lay eggs, but is male. Contrast with Pregnant Reptile, in which a non-mammal reproduces the mammal way.

Whales don't lay eggs; they're mammals that give live birth.

Is this part of the recipe?

Is this part of the recipe?