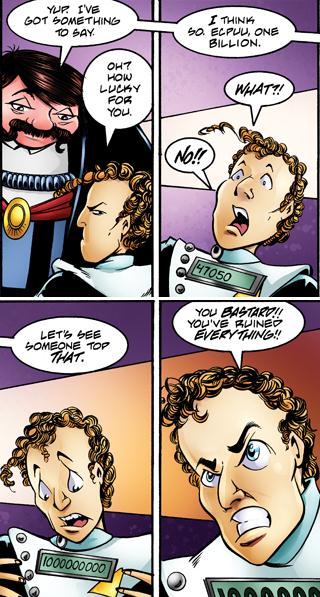 "It's going one time, it's going two times
Sold to the gent who wears the stunned expression"
— Sparks, "Now That I Own the BBC"
Advertisement:

An Auction is happening, people are bidding in sensible increments and then, all of a sudden, someone puts in such a high bid that no one would dare bid against them. This can be an escalation of a bidding war or a total newcomer. The correct name for this kind of tactic is a Jump Bid, and it can be very effective or land you paying far more than you needed to.

Used primarily for dramatic effect, either to highlight the value of the item (particularly if it was previously considered of low value or it has a secret use) or to dramatically introduce a character to a scene. Nothing says "I am rich and powerful, look this way" like doubling the bid for a teapot when the last bidder had just got to £900,000. Also very common in Bachelor Auction setups. A similar setup can occur in gambling, where a gambler tries to scare off the other gamblers with a huge wager. (Often called 'buying the pot' in this case.)

If said auction is an Auction of Evil which the heroes are infiltrating, they may have to resort to a backup plan that does not involve bidding.

Depending on the format of the auction this may or may not be possible in Real Life. Some auctions may limit the margin by which a new bid can surpass the previous high. It also depends on the mechanics of the auction itself. The English auction, where the highest bidder pays the amount they bid, allows this. A Vickery auction, by contrast, takes the legs out from underneath this trope as the one who wins the auction by bidding the highest only has to pay an amount equal to the second-highest bid — even if the Whammy Bidder made the price jump from $100,000 to $5 million, if no one else beats them the winner only has to pay $100,000.

Not to be confused with a Whammy in a Game Show.