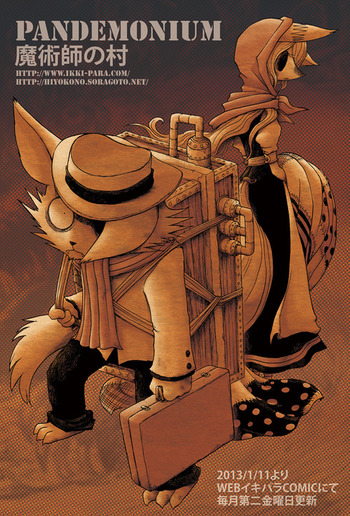 There's a rumor that the "Land of the Variants" exists somewhere in the theorized home of the destructive Sky Golems. Covered in a poisonous miasma, there are tales that a village of variant wizards is hidden there with the power to resurrect the dead.

Walking himself to the point of collapse while lugging a mysterious box, Zipher awakens surrounded by variants. After celebrating at having reached his destination and collapsing again, he reawakens requesting an audience with their village chief so that he can resurrect his dead lover.

Pandemonium -Wizard Village- (パンデモニウム-魔術師の村- Pandemonium -Majutsushi no Mura-) is a manga created by Sho Shibamoto and is part of his Verse alongside his other works, The Jackalope and Flower Knight Dakini.

It can be read in English here.