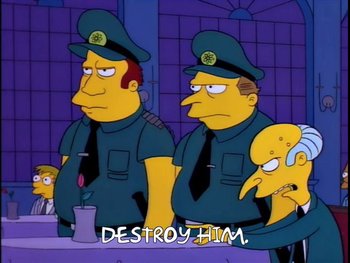 The exact opposite of Authority Equals Asskicking; this is when somebody who isn't physically intimidating, or who's even outright weak, has at their disposal plenty of people who are. Call them what you will: goons, thugs, hired muscle, bodyguards, the long and short of this is they're suddenly a lot more intimidating because even if they can't hurt you themselves, they can give somebody much stronger the order to do so.

Supertrope to Mister Big. Can overlap with Evil Cripple and Dark Lord on Life Support, but the boss doesn't have to be disabled or even all that weak, just physically less intimidating than who they have at their command. Compare with Strong Empire, Shriveled Emperor. Contrast Bodyguarding a Badass.

Not to be confused with Hard Levels, Easy Bosses, though the two can occasionally overlap. A Non-Action Big Bad is occasionally this.