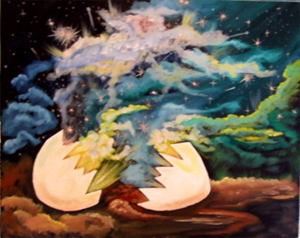 Now we know which came first. (But then, who laid it?)note Not a chicken, obviously.
Illustration by Carol Phillipson

.
"It is said to have emerged from an egg in a place where there was nothing, then shaped the world."
— Pokemon Platinum's Pokédex description for Arceus
Advertisement:

A common Creation Myth motif: the world, God, or some primordial entity comes into existence by hatching from an egg or similar structure.

This is generally used so that the universe's life-cycle mimics those of many of its creatures, giving the trope metaphorical significance as a symbol of life's beginning. As such, it is found in many religious stories and ancient mythologies, but it is also commonly found in many modern Mythopoeias as a way to begin the narrative. Sometimes the egg is laid by a goddess or creature that existed before the universe did, thus overlapping this trope with Whale Egg.

See also Primordial Chaos, which may be where these are located, and World Tree, which has similar connotations.