Most Writers Are Human 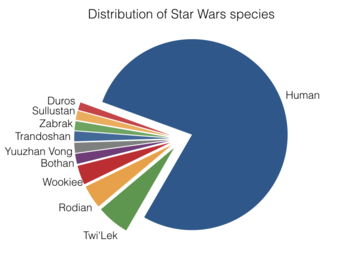 "That cloud of stars is our galaxy, the Milky Way. Our solar system is on the edge of it. We hurl through an incomprehensible darkness. In cosmic terms, we are subatomic particles in a grain of sand on an infinite beach.
...
I wonder what's on TV now."
— Calvin, Calvin and Hobbes
Advertisement:

...at least that we can prove. There are no known non-human writers, outside of A.I. and a few non-human primates (authoring very simple works and probably dictating).

Let's not forget that Most Readers are Human as well, and people prefer characters they can relate to. This is why most fictional characters are H. sapiens instead of, say, T. rex or A. oryzae. The inherent human quality of relating to those like us and whom we can understand is also why all characters we connect and sympathize with, human or not, have at least some human qualities and psychological characteristics, or are at least perceived by us to have them note In fact human attributes in literature extends far beyond how stories characterize characters. How we describe everything in our world, and by extension fictional worlds, is pervaded by human-relatable concepts and allusions. Literature would read like a bizarre or cold technical paper without this human touch.

Besides the large number of stories concerning humans on Earth, this manifests in five major ways:

The inevitability of this varies by medium; after all, most actors are human, too. There are, however, more non-human actors than non-human writers, at least by common knowledge. For much more on the subject, see this series

Most game systems will reflexively assume that the default player character is human (or at best very nearly so) and allow this assumption to creep into their rules, setting, and suggested campaign styles. For example, nearly any combat system that goes into significant detail will be primarily written for roughly human-sized combatants with two arms, two legs, and one head on top of the body. Descriptions will almost unfailingly assume human-level perceptions with any "super-senses" that player characters might technically also have usually being given short shrift. And so on. At the extreme end, players may only ever be allowed to play humans and very-near-humans even in a setting where dozens or hundreds of other reasonably intelligent species also exist (such as many D&D campaigns).

Compare Anthropomorphic Shift, where an entirely non-human cast gradually slips into this trap. As such, this is one of the major sources of Furry Confusion. Sometimes characters are clearly not human but use phrases like "I'm only human" anyway. It can be a direct cause of a Human-Focused Adaptation.

Contrast Xenofiction, an attempt to avert this by taking the viewpoint of distinctly non-human characters, despite coming from human authors (as far as we know). No known Artificial Intelligence writing program is self-aware enough to write its own Xenofiction.

See also Aliens Speaking English, Bishōnen Line, Creator Provincialism, Earth Is the Center of the Universe, Human Aliens, Humanoid Abomination, Humanoid Animals, Monstrous Humanoid, and What Measure Is a Non-Human?. See also Humans Are White, when the majority of important human characters in the setting appear to be Caucasian.