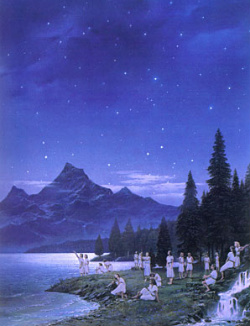 Rise and shine, Elves, you've got a long journey ahead.
The tales of the First Age when Morgoth dwelt in Middle-earth and the Elves made war upon him for the recovery of the Silmarils, to which are appended the downfall of Númenórë and the history of the Rings of Power and the Third Age in which these tales come to their end.
— The Silmarillion, title page inscription
Advertisement:

The Silmarillion is J. R. R. Tolkien's book of the history of Middle-earth, from the creation of the universe to the end of the Third Age. Tolkien had been working on it for most of his life until his death in 1973. His first book The Hobbit was not originally planned to share the same setting, but ended up that way, and its sequel The Lord of the Rings continued and concluded the narrative of the setting. It was posthumously edited by his son and literary executor Christopher (with assistance from Guy Gavriel Kay, later a fantasy author himself) and finally published in 1977.

Originally, The Silmarillion was Tolkien's attempt to make a purely "English" mythology based on Welsh, Saxon, Finnish, and Norse sources. What it eventually became was a "Pan-European" constructed world, growing ever more intricate and detailed through the decades Tolkien worked on it.

The book is subdivided into:

Note: The terms "Quenta Silmarillion" or just "Silmarillion" are used (in-story and in the real world) for the whole body of stories from the First Age, regardless of their inclusion in the 1977 book The Silmarillion.

Earlier and later forms of the stories used in The Silmarillion, insights into their evolution over a period of more than 50 years, and additional texts and material can be found in The History of Middle-earth and Unfinished Tales of Númenor and Middle-earth.

The Silmarillion provides examples of: