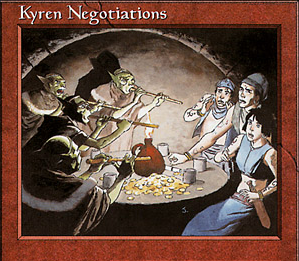 The Big Bad and the Hero meet in peace. Whether the intent is malicious or benign, both sides seem willing to talk it out, at least for now. And anyway, you can't just lop off somebody's head during parley, right? Eh... right?

Apparently you can, considering the fact that somebody involved in the parley has just busted out swords, guns, or a Humongous Mecha. Both sides can pull one of these, though it usually happens when a Mook from one side of the conflict goes to negotiate with the other sides. There are exceptions, however, where many members from both sides participate. In this case, somebody pulling this trope can spark an all-out Mexican Standoff as everybody pulls weapons, resulting in a peace agreement potentially leading to a mutual slaughter.

In a series on the cynical end of the Sliding Scale of Idealism Versus Cynicism, a character that does this is either being badass for silencing the enemy or is just being really stupid. As this trope tends to cause war to break out, there aren't many idealist series with this in them, but characters that do invoke this trope tend to be just incredibly stupid.

Note that, in the long term, regardless of who initiates this trope or why, the main accomplishment will be that the other side simply won't trust them to negotiate in good faith. Which might be effective (albeit horrifically immoral) if you can completely wipe out the enemy in this one attack, but will absolutely come back to bite you in the butt later if the enemy has the upper hand.

Contrast and compare with Shoot the Messenger, in which a messenger, who comes in peace, but only to deliver a message, is killed. The two tropes can overlap, as well: if the victim of the invoker of this trope delivers a message and is negotiating, it is both tropes at once.

See also: I Surrender, Suckers, Gunboat Diplomacy. The calling card of the Ambadassador when the peaceful solution fails.