Recap / Star Trek: The Next Generation S2E5 "Loud As a Whisper" 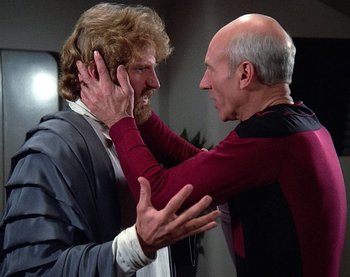 The Enterprise gets orders to transport a mediator named Riva to Solais V to bring an end to a bitter war. Upon meeting him, the crew learns that he is deaf and speaks through three interpreters who communicate with him telepathically. Riva immediately finds himself taken with Counselor Troi and bonds with her over dinner.

Upon reaching Solais V, Riva beams down to settle the dispute with only Riker and Worf as security, reasoning that bringing anyone else will only increase tensions. But only moments after arriving (before they even have the table set up) one of the natives becomes angry and fires at Riva, somehow killing all three of his interpreters with one shot when Riker pulls him out of the way. After beaming out, Riva becomes despondent and loses faith in his ability to mediate a peace. Even after Data learns his sign language, he insists that he cannot be an effective mediator without his interpreters.

Counselor Troi tells Riva that she will handle the negotiations herself and asks his advice. He tells her that he didn’t have a secret trick to negotiating; he merely found something in common between the two sides and worked from there. He also says that he liked to turn a disadvantage into an advantage. Troi asks why he can’t do that now, and it gives him an idea. He beams down to the planet again to renew the negotiations. When Riker asks him how the natives will understand him without his interpreters, he explains that he intends to begin the negotiations by teaching the natives his sign language. As they learn to communicate with him, they will learn to communicate with each other, giving them common ground to start from. He gives the Enterprise permission to leave him behind, stating that the peace talks will be a long process, but he believes they will be successful.