Webcomic / DM of the Rings 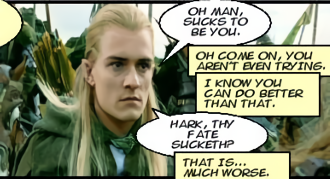 "Lord of the Rings is more or less the foundation of modern D&D. The latter rose from the former, although the two are now so estranged that to reunite them would be an act of savage madness. Imagine a gaggle of modern hack-n-slash roleplayers who had somehow never been exposed to the original Tolkien mythos, and then imagine taking those players and trying to introduce them to Tolkien via a D&D campaign."
— The Blurb for the first strip
Advertisement:

According to DM of the Rings

, The Lord of the Rings wouldn't make a good Dungeons & Dragons campaign.

Think about it. Loads of Backstory, few battles, limited treasure (even if you aren't expecting a Monty Haul campaign), and lots and lots of talking (since many events are told to others after the fact).

To a player whose rules are Play the Game, Skip the Story and RPGs Equal Combat, this would make for a frustrating game, and just as much or more for the Dungeon Master shepherding them through it. But it makes a great comic.

DM of the Rings uses screen captures of the films and places them in the format of a comic book. The comic never shows the faces of the players (although the short-lived original follow up, Chainmail Bikini

did). Instead, we see shots of the films as actions the players are taking.

The comic doesn't really satirize The Lord of the Rings as much as it makes fun of the way roleplaying sessions tend to go, especially the struggle between the Game Master and players. It's been described as an overall example of how not to conduct a campaign in general.

Other works by the author include Chainmail Bikini, Stolen Pixels, Spoiler Warning and the column "Experienced Points"

This comic has inspired several Follow the Leader comics applying the formula to other works, notably TV Tropes semi-favorite Darths & Droids. It is the Trope Maker for the Campaign Comic.

DM of the Rings provides examples of the following tropes: