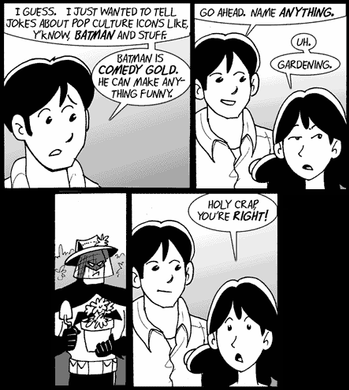 Everything's funnier with Batman.
"... but this man, at the centre of everything, stoic in the face of chaos... he's the funniest man in the world!"
— Charlie Chaplin, Murdoch Mysteries, "Murdoch and the Tramp"
Advertisement:

Compare No Sense of Humor; So Unfunny, It's Funny; Narm. Contrast Laughably Evil; Dude, Not Funny!.