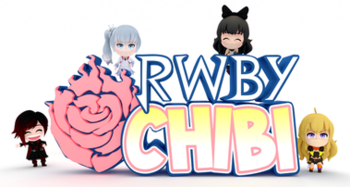 "Nothing bad... ever... happened. EVER."
Join the cast of RWBY in a new series of cute, comedy shorts with infinite possibilities! It's playing tag! It's baking cookies! It's posing as police officers! It's... really quite absurd. It's RWBY CHIBI!
— Official description on Rooster Teeth's website

RWBY Chibi is a CGI animated series from Rooster Teeth, and a spinoff of their RWBY series. The characters from RWBY are chibi versions of their original selves that participate in non-canon comical antics.

A preview of a number of skits was first shown at the end of the RWBY Volume 1 Tugg event in April 2016, and Season 1 officially premiered on the Rooster Teeth website

on May 7 of the same year. The series ran for 24 episodes until October 15th, 2016, a one week before the premiere of RWBY's fourth volume, and is planned to make future returns in the hiatuses between volumes.

On May 13th, 2017, the first episode of Season 2 was made available for Rooster Teeth FIRST subscribers, with episodes being made publicly available a week later. The finale for the season was shown for FIRST members on October 7, and for the public on October 14. Two special holiday episodes were released later that year.

Season 3 started on January 27, 2018 for FIRST members, a week after the parent show's Volume 5 finale. After the first eight episodes of the season, the show took a midseason break. The season would resume on June 30 up until August 18.

First members see episodes of both RWBY Chibi and its parent show a week early. As a courtesy, please refrain from troping until public release.

open/close all folders
Tropes A