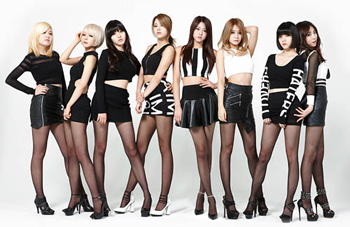 A Korean Pop Music idol Girl Group who debuted under FNC Entertainment in August 2012, and went on indefinite hiatus in 2020. The group's full name is Ace of Angels, and they are well-known for being a "transformer group" - part band, part dance. AOA originally promoted as a combination of two units: five in the band unit (officially called AOA Black), and seven in the dance unit. Together as AOA they focused on pop-rock and acoustic pop to accommodate both the units' strengths.

Despite simultaneously promoting both units being their original premise, the last time they actually released music together was in 2012 with Wanna Be - afterward, the two units also got their own noteworthy promotions. AOA Black brought the group their first number one on several music charts with Moya which showed off their prowess as a band; and the dance-unit single Miniskirt was nominated on a music show once on Inkigayo - and there the group got their first win.

They are a divisive group for many reasons, including: leaving their band unit on hiatus for three full years in favour of their dance unit and more pop friendly music (thus demoting drummer Youkyung and leaving her on the sidelines by trying to make the dance unit the only AOA), and the bullying allegations between two members, which are elaborated on below.

In October of 2016, after being on hiatus for several years (and not even included in the group's first official photobook) Youkyung announced she would be leaving the group following the expiration of her contract, although she would be a guest member in any further AOA Black events. Soon afterwards Jimin posted a photo of all eight members to her Instagram with the caption simply reading "AOA".

In early 2017, fans noticed that Choa hadn't made any public appearances with the group for quite a while, to which FNC replied she was on hiatus. Fans were immediately skeptical and began speculating as to the "real" reason she had stopped promotions, and soon afterwards Choa announced via her Instagram that she would be leaving the group

due to mental health issues, and in May 2019 she ended her FNC contract entirely. In that same month, Mina suddenly announced she would also be leaving the group, something which surprised fans as she had previously spoken about wanting to remain in the group for "years to come" and had actually recorded lines for their then upcoming single "Come See Me".

In August of 2019 the group took part in the reality show "Queendom", a show where six girl groups/soloists compete to see who is "the real number one". Competing against Mamamoo, Park Bom, Oh My Girl, Lovelyz and G Idle, they came in fifth overall, but won acclaim for their performances of "Sorry

" and their remix of Mamamoo's "Egotistic

In November of 2019, "Come See Me" was released, and the song performed very well

on the charts, leading to jubilant fans who were expecting AOA to finally bounce back and regain their lost popularity. Sadly, this was not to be - in June of 2020, former member Mina shocked fans by posting allegations via her Instagram account that she had been severely bullied for the better part of ten years

by an unnamed member to the point of becoming suicidal, and that this was what had directly influenced her decision to leave the group. In response, Jimin posted the word "Fiction" on her social media, but then deleted it, after which Mina confirmed that Jimin was the member she had been referring to in her post. This caused an enormous firestorm of controversy and backlash towards Jimin and the other members and essentially stopped AOA's career dead in its tracks.

On July 4, 2020, it was announced that Jimin had left the group and would be retiring from the entertainment industry.

In August of 2020, Mina posted disturbing photos of herself having apparently attempted suicide to her social media account, leading to her briefly being hospitalized. Shortly afterwards, FNC Entertainment released their own statement

, saying they hoped Mina recovered as quickly as she could, and also said they would be refraining from releasing their side of the story (and that they had informed the other members not to speak about it) until Mina was in a better state of mind. On August 11, Mina apologized for concerning fans and said she would be deleting her social media in order to focus on her mental health

note although she would go on to reactivate it less than eight weeks later, and in September of 2020, her company announced she had terminated her contract with them

after four months and would be going on hiatus.

In December of 2020, it was announced that Yuna had left the company

, and in February of 2021, she became a yoga instructor

, leaving only Seolhyun, Hyejeong and Chanmi as members.

In September of 2021, following a full year of Mina's continuing to bring the incident up on her social media and either making new claims or elaborating on previous ones, as well as her being directly involved in multiple controversies/scandals (as elaborated on in the YMMV page), a series of conversations between Mina and the other members was released

that turned the whole matter on its head. In these messages, Mina was revealed to have been initially very warm and friendly towards Jimin before suddenly turning on her and repeatedly insisting Jimin had been nothing but a bullynote Choa and the other members were shown to have attempted to mediate things and calm Mina down, but she refused to listen and insisted she was the victim. She was also shown to have sent Jimin several vicious text messages wherein she insulted her looks, called her a whore and threatened to physically assault or kill her. Messages between staffers were also released revealing that Mina was feared by the group's staff members, as she would do such things as demand that they take care of personal appointments for her and her family, as well as lashing out at the staffers if things were not done to her liking. This release caused the vast majority of netizens to revise their opinions on Mina's claims, and conclude that Jimin was simply a (perhaps slightly overly) strict leader whose personality clashed with Mina's, and there had been no bullying at all. After first announcing

she would be holding a press conference and providing "evidence and witnesses"note something she was notorious for flip-flopping on throughout the scandal, Mina wrote that she would be deleting

it less than two weeks laternote although she has disabled the comments section on all her posts, promising

to "eventually reveal the truth" about her time in AOA. At the same time, she accused her sister (who she had previously spoken ill of in the past) of "swindling" her and her mother out of money and how the sister was "threatening to reveal that [Mina] was evading taxes", to which her sister replied

◊ by encouraging her to seek help for her issues and accused Mina of only acting like she was family when she needed something.

their contract with her had ended.

On February 9, 2022, Mina took to her Instagram to write a public reply

to a direct message she had received from a fan who asked her why she had seemingly made up the entire situation. In her reply, Mina wrote that she believed FNC had maliciously edited the transcript to make her look bad, and reiterated her claims that Jimin had bullied her, saying that Jimin's "apology" had been soulless, insincere and robotic, and "even the director of Dispatch" had agreed that she (Mina) was the victim. She also stated there were "other victims" and she felt "unjust" after listening to the recording and demanded the "unedited version" be released, saying "I don't care if I lose or whatever, it's just important for me to reveal the truth as it is". Soon afterwards, however, she deleted the post entirely.

In July of 2022, Mina posted to her Instagram to reveal that after her previous job in a skincare clinic

, she was the owner of a small cafe

. Soon afterwards, the real cafe owner posted saying that Mina was simply an employee, after which she deleted her post.

In August of 2022, it was announced that former member Jimin would be taking part

in an upcoming reality show called "The Second World", a show where idols who were/are the rappers of their group would be given the option to show their vocal talents. The fan response to this was enthusiastic, even more so after her first performance

, as she delivered a fantastic Take That! rap against everyone who had made up/believed the malicious rumors about her.

In September of 2022, Mina posted photos of herself

together with Hyejeong that appeared to show the two spending time together and being happy. Fans were shocked, especially considering Mina had previously unfollowed Hyejeong (whose mother defended Jimin during the initial accusations). However, some fans soon realized that Mina was in fact re-posting old photos of the two and called her out, after which she promptly deleted the post.

Do not confuse with Age of Apocalypse the comic book, or The Axis of Awesome the band, which both use the same initials. Also do not confuse with the Hong Kong pop twin duo with the same name, who are unfortunately overshadowed and hard to search up.