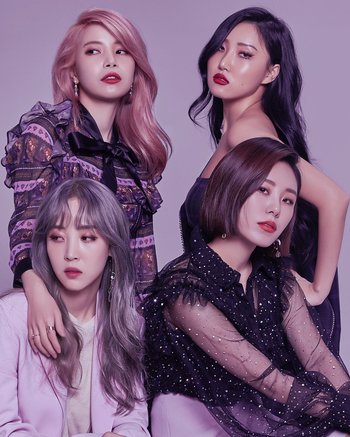 Mamamoo is a four-member Korean Pop Music Girl Group under Rainbowbridge World (RBW). After releasing several collaborations with other popular Korean artists such as Bumkey, K. Will and Geeks, they officially debuted with their single "Mr. Ambiguous" in June of 2014. Since then, they have gained attention for their talent and charismatic stage presence, leading them to be hailed as one of the top rookie groups of 2014. Since then, they have experienced growing success with each successive release. The group is known for their retro, jazz, and R&B concepts and strong vocal performances.

Tropes related to Mamamoo and their music: